Introduction
Waterways and MERG have recently published details of a survey methodology for locating and mapping īnanga spawning sites near coastal rivermouths.

The full paper in NZ Journal of Marine and Freshwater Research is available online here.


The problem
Īnanga (Galaxias maculatus) is one of five galaxiid species that provide New Zealand’s ‘whitebait’ fishery. Four of the five species are also threatened to various degrees. The management of whitebait species is therefore important for conservation objectives as well as for maintaining the fishery. Aside from regulations on fishing activities (which target the juvenile fish on their migration from the ocean into freshwater systems) the degradation of habitat is a particular focus. Although all life stages are important, the protection of spawning habitat may be particularly important for īnanga. It is found in very specific places on the riparian margins of coastal waterways. These areas have become degraded by historical activities associated with urbanisation and other intensive land uses near waterways. These changes have the potential to dramatically impact on fish populations since the inanga life cycle is relatively short (1 -2 years). Poor spawning success in one season can be expected to reduce the stock of whitebait and adult populations in the next season. Repeat cycles of this may very quickly diminish fish stocks - especially if it occurs at many spawning sites simultaneously. In reality, some rivers have become ‘sinks’ that contribute little to maintaining stocks each year[1]. The fish population is reliant on other rivers (the ‘sources’) where spawning success is higher.

Protecting and enhancing spawning habitat is therefore a very practical activity that can assist with whitebait conservation, and tools such as spatial planning and the use of protected areas offer promising ways to address the problem. However, locating where the spawning sites are is not straightforward and this has become a barrier to practical action. The location and extent of the spawning habitat requirements in different rivers is essential information for the design of effective strategies. In a nutshell, we need to know which areas are important to protect, and whether additional protection (or restoration) would be beneficial. However, because rivermouth systems are dynamic, the location and extent of spawning sites can change over time. This introduces some complexities for ‘nailing down’ the answers that are needed to inform effective conservation strategies.

Overview of the census survey method
To help address the above problem, we developed a survey methodology to detect all of the spawning in a catchment. Reliably capturing this information over time is very useful for identifying trends. Different forms of īnanga spawning surveys have been carried out in New Zealand for several decades and our approach was to adapt the existing methods to achieve the ‘catchment scale census’ we were after.

The main components of our methodology are:

Example of the method in action
In the paper we include details of how the census survey was applied to locate spawning sites in the Heathcote/Ōpāwaho catchment after the Canterbury earthquakes. We were especially interested in whether they might have shifted location in the catchment. At the start of the study the post-quake pattern was initially unknown (similar to a river had never been surveyed) but in this case the river has been well-studied over several decades. By comparing our results with earlier īnanga spawning surveys we were able to show that the downstream limit shifted considerably following the earthquakes. Because many current riparian management activities are not compatible with protecting spawning habitat this is important information for conservation[4].

Other aspects such as trends in areas that are the most used or produce the most eggs could be resolved by repeat surveys. Another interesting finding was the discovery of high egg numbers at sites where reed canary grass (Phalaris arundinacea) was the dominant vegetation. Although this invasive species has previously been regarded as a threat to spawning habitat it currently supports the majority of spawning in the Heathcote/Ōpāwaho. Together, these examples show some of the useful outcomes that may be generated by a comprehensive survey methodology to reliably quantify īnanga spawning habitat at a catchment scale. The census-survey approach is applicable to rivers nationwide and will help to address the current information gaps around where spawning occurs and what is needed to protect it. 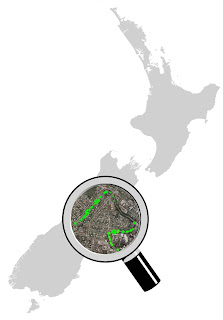 Thanks to the Ngāi Tahu Research Centre, IPENZ Rivers Group, MBIE grant C01X1002 in conjunction with NIWA, and the many volunteers that helped to support this work.