The Kaikōura earthquake in southern New Zealand: Loss of connectivity of marine communities and the necessity of a cross‐ecosystem perspective.
https://doi.org/10.1002/aqc.3122 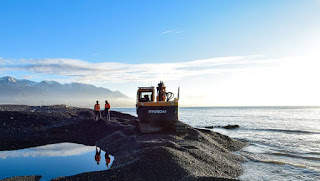 Great article by Sophie Trigger at the Marlborough Express that features our recent work investigating earthquake impacts on river mouths along the Kaikōura coast.

We were able to locate several whitebait spawning sites and made some interesting discoveries with many of them occurring on flood events. Read more about an ecological experiment to rescue eggs stranded high on the riverbank with the help of the Environment Canterbury flood management team.
https://www.stuff.co.nz/environment/112863187/kaikura-whitebait-discovery-could-have-flowon-effects 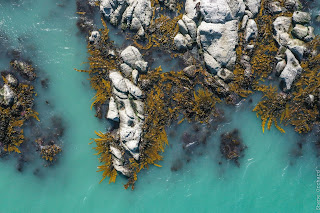 We have completed a variety of these high-resolution surveys to investigate diverse aspects of recovery that include habitat shifts and vegetation recovery at our study sites. The sites themselves are characterised by a a variety of environmental conditions and different degrees of uplift resulting from the earthquake event. The high degree of spatiotemporal variation makes the identification of overall impact a challenging task! 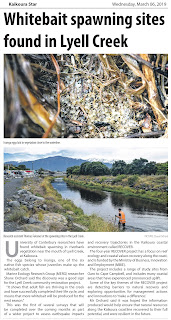 Nice article in the Kaikōura Star on our surpise finding of whitebait spawning sites in downstown Kaikōura.

The spawning habitat in this area has benefitted from riparian restoration work in Lyell Creek / Waikōau since the earthquakes. 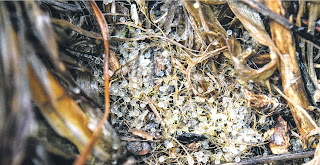