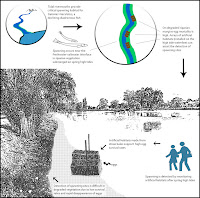 As part of our whitebait conservation work Resilient Shorelines developed a methodology for using artificial habitats as an experimental tool. The objective was to overcome detection problems that are inherent in other techniques. This approach provided valuable information to support other investigations designed to location and map spawning habitat.

The main results have been published in Ecological Indicators.
Follow the link to the article here

Background to the detection problem
The identification of spawning sites is a significant issue for management. It is usually attempted by direct observations of adult fish during spawning events, or searches of riparian vegetation for eggs. However, both of these approaches have conceptual and practical weaknesses.

As an indicator of spawning habitat, observations of adult fish suffer from poor precision unless spawning was actually observed. Adult īnanga spend several days shoaling in pre-spawning aggregations and devote considerable energy to searching riparian vegetation prior to selecting a spawning site (Benzie, 1968). There may be a large general location in which the same aggregation could be observed prior to spawning that is relatively imprecise compared to the habitat actually used. In comparison direct searches for eggs provide indisputable evidence that spawning has occurred. However, egg mortality between the date of spawning and the field survey may reduce the effectiveness of this approach. Recent research has found that spawning may occur irrespective of whether the habitat is favourable for egg survival (Hickford & Schiel, 2011).

In a practical sense it also means that timing is less critical for field survey logistics. For example, it can assist a small team in surveying a large study area whilst also addressing the confounding factor of egg mortality which can result in uneven detection probability over time across the study area. In other words, areas surveyed first have a greater chance that eggs would be discovered compared to those surveyed after several days have elapsed. Using the Christchurch post-earthquake studies as an example, this effect can be considerable.  These studies required 8-9 days of survey effort by a team of 3 researchers to cover the study site area (Orchard & Hickford, 2016).

Following this method, artificial habitats are used in conjunction with census-style surveys of riparian vegetation with the objective of detecting and quantifying all of the spawning sites in the study area (Orchard & Hickford, 2018)