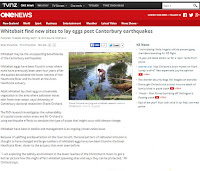 Case study in the biogeographic impacts of disaster events

A component of the Resilient Shorelines study set out to determine if the earthquake effects had altered the location and pattern of sites utilised by īnanga (Galaxias maculatus) for spawning, which are typically restricted to very specific locations in upper estuarine areas near the freshwater-saltwater interface. As such, īnanga spawning sites are potentially a very good indicator of change, and conversely, īnanga may be especially vulnerable to hydrological alterations caused by disturbance events.
And the answer is - yes, there were some major changes!Read the report on TVNZ ONE News
In general, findings from our very first year of research provided strong support for our major hypotheses around habitat shifts and new vulnerabilities - but also indicated there was a lot more work to be done to better understand the causes and consequences of change.
Follow these links to read more about this case study and the fascinating results!
Unexpected findings - a bonus effect?
A surprising result from our early work was the discovery that spawning habitat had expanded following the Canterbury earthquakes, and was more extensive than ever previously recorded (Orchard & Hickford, 2016). Further studies in 2016 found even greater areas of spawning habitat (Orchard et al., 2018). The total area involved was nearly 2x the next largest area of spawning habitat recorded in any catchment in New Zealand (based on records in the National Īnanga Spawning Database).

Despite this apparent bonus, many of the locations involved were exposed to threats that resulted in high egg mortality. This is not surprising given that many of these area were previous known to provide spawning grounds.
Looking forward, it is important to protect those areas that are now providing habitat to ensure this potential is turned into reality through a combination of planning and practical management. In this way we can ensure the 'bonus effect' remains in place and stays resilient into the future.
Climate change implications
There are important learnings for climate change in these case study results. Similar habitat shifts can be expected in response to other sea-level changes such as those expected with global sea-level rise. There is an urgent need to plan ahead for those changes and this requires defensible information on potential future scenarios and how they might be managed to control adverse effects. Since this mostly requires the re-arrangement of land uses over time, planning ahead is key. The results and methodolgies of this case study will assist this process by enabling the construction of scenario models, and supporting the design of monitoring programmes to measure change.
As well as having their own notable conservation value, īnanga  spawning grounds are an excellent indicator of climate  vulnerability due to their sensiivity to salinity and water level changes. However, similar techniques could also be applied (and are needed) to help understand the many other interactions between nature and climate change - particularly where water is involved.
Acknowledgements
Support for the case study is gratefully acknowledged from Brian Mason Scientific & Technical Trust, NIWA, IPENZ Rivers Group, Ngāi Tahu Research Centre and the Marine Ecology Research Group at UC.
REFERENCES
Orchard, S., Hickford, M. J. H., & Schiel, D. R. (2018). Earthquake‐induced habitat migration in a riparian spawning fish has implications for conservation management. Aquatic Conservation: Marine and Freshwater Ecosystems, 28(3), 702-712. doi:10.1002/aqc.2898
Orchard, S., Hickford, M. J. H., & Schiel, D. R. (2018). Use of artificial habitats to detect spawning sites for the conservation of Galaxias maculatus, a riparian-spawning fish. Ecological Indicators, 91, 617-625. doi:10.1016/j.ecolind.2018.03.061
Orchard, S., & Hickford, M. J. H. (2018). Census survey approach to quantifying īnanga spawning habitat for conservation and management. New Zealand Journal of Marine and Freshwater Research, 52(2), 284-294. doi:10.1080/00288330.2017.1392990.
Orchard, S., & Hickford, M. J. H. (2020). Protected area effectiveness for fish spawning habitat in relation to earthquake-induced landscape change. In R. Maiti, H. G. Rodríguez, C. A. Kumari, D. Mandal, & N. C. Sarkar (Eds.), Sustainable bioresource management: Climate change mitigation and natural resource conservation (Chpt 21). Apple Academic Press. 526pp.